You whom I could not save
Listen to me.
Try to understand this simple speech as I would be ashamed of another.
I swear, there is in me no wizardry of words.
I speak to you with silence like a cloud or a tree. – Dedication, Czeslaw Milosz

With these words, poet Melanie Perish opened our open mic in celebration of 100 Thousand
Poets for Change at Sundance Bookstore in Reno September 26. About 35 people, readers and writers, gathered for our first annual event which included a panel discussion of poetry  and change followed by an open mic reading. 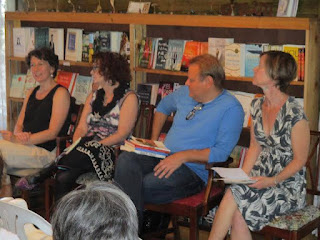 Reno Poet Laureate Gailmarie Pahmeier and UNR professors and scholars Ann Keniston and Steve Gehrke discussed how poetry can enact change as well as be the change itself. The words of Juan Felipe Herrera, the US Poet Laureate, set the tone for the panel:

“Poetry is a call to action and it also is action. Sometimes we say, "This tragedy, it happened far away. I don't know what to do. I'm concerned but I'm just dangling in space." A poem can lead you through that, and it is made of action because you're giving your whole life to it in that moment. And then the poem — you give it to everyone. Not that we're going to change somebody's mind — no, we're going to change that small, three-minute moment. And someone will listen. That's the best we can do.” - Juan Felipe Herrera

Gailmarie Pahmeier encouraged the audience to read widely.  She read from a new edition of Kim Addonizio’s Jimmy & Rita and the poem Instead of a Shotgun by Carey Salerno, promoting caring for animals and the homeless. 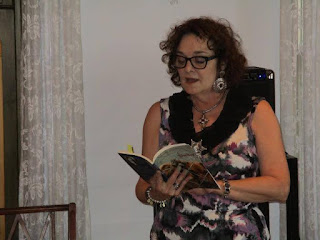 As each reader stood at the podium to share a poem that spoke to them personally of change or political awareness, I relished the experience of being in a room of people busy with paying attention to the poem and sharing a compassion for others.

it’s we who do such things, we who set the slant, embed the tip, lift the sledge and drive the nail,
drive the nail which is the axis upon which turns the brutal human world upon the world. -  The Nail, CK Williams

Poet Ann Keniston read Dedications by Adrienne Riche and spoke about the tension between the wish to change people’s minds via poetry and the sense of the difficulty of doing that—as something that energizes and animates a lot of recent poems by herself and others.

What I love about a reading at Sundance Books is letting my eyes wander the spines and titles of books surrounding me as I listen to the reading. Outside Sundance Books roared Reno’s leather-studded motorcycles and their riders.  A gust of wind blew leaves off the trees in the courtyard outside the Victorian building that houses Sundance.  When Michael Branch read these lines from Stephen Dobyns’ poem How To Like It, I wondered at how this poet could write so well about my own unsettled desire and restlessness:

These are the first days of fall. The wind
at evening smells of roads still to be traveled,
while the sound of leaves blowing across the lawns
is like an unsettled feeling in the blood,
the desire to get in a car and just keep driving. – Stephen Dobyns, How To Like It


I realized that the poems we had heard, poems of change, political poems, shared this restlessness, dissatisfaction, and sincerity while resisting cynicism.  Everyone who participated in Reno’s Poets for Change event is already brainstorming ideas for next year’s celebration, excited to see where we can go with 100Thousand Poets for Change.
Posted by Karen A. Terrey at 9:05 AM 1 comment: