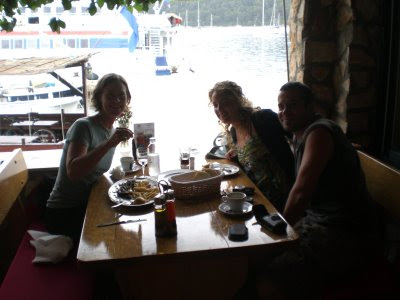 I think this island emits an energetic friendliness - even before I boarded the ferry early this morning leaving Dubrovnik, I befriended a couple from northern Spain, Gorge and Yolanda. Here we are having lunch once we arrived on Mljet - that's an anchovie hanging in my hand, caught about ten minutes before I ate it. It was delicious. The legendary belief is that Mjlet is the island inhabited by the Sirens that lured Odysseus from his trip and trapped his sailors for some time before they could escape the generous hospitality. The island is heavily forested and in the middle of the island is a salt water lake open by a fjord to the ocean. And on that lake is a small island with an old monastery, St. Mary's. I rode a bike around the lake this afternoon and took a small boat out to the monastery. A cross stands before the ocean where sailors can pray for good weather before they sail. I ate the excellent anchovies at Konoba Ankora, the restaurant I am now having dinner at - a fresh plate of homemade goat cheese and proscuitto salad. Life is good in Croatia.
Posted by Karen A. Terrey at 11:51 AM 1 comment: 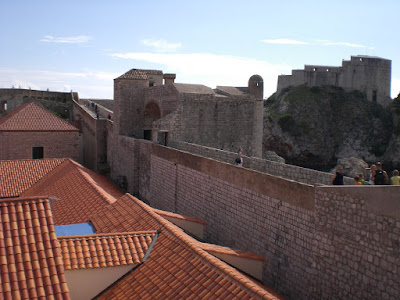 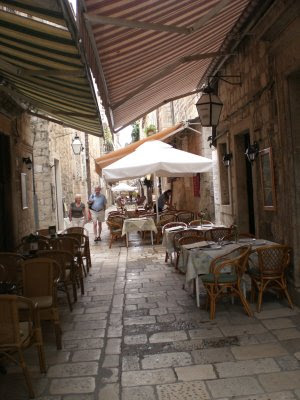 I found a private accomodation last night around 7:30 pm after getting in from the bus station. I'm staying with widow Maria in her extra room. She brought me into her kitchen and told me to ‘sit’, and poured me some orange syrup and water in a glass, a refreshing drink after 8.5 hours on the bus from Zadar. She made some big gestures of something coming down from the air, or maybe from the rocky bare hillsides above town? I thought maybe she was referring to the bombing by the Yugoslavian army in ’92. I asked her if she stayed or if she left town, that it must have been scary, trying to show compassion on my face because she spoke no English. She made big booming noises with her hands above her face motioning something. I thanked her for the juice, confused. Then as I was dressing to leave for dinner, thunder cracked above town. She came down with an umbrella, made the booming noise again and the hand motion, and handed me the umbrella for the evening. She was talking about rain.

I was exhausted enough to sleep in the lumpy dipped bed, shaped like the country of Croatia, with a large mountain range splitting the coast from the interior valley. But I only had to walk half a block down the narrow stairs to find a cafe this morning with wi fi.

This city is marble streets, narrow stairways, hanging gardens, cafes and churches. People speak an unimaginable amount of different languages in Croatia. A tour guide I met spoke ten languages. In a street table, writing on my computer now, tours walk by me every 15 minutes - a different group, a different language. Chinese right now. And the smokers – the train from Zagreb to Zadar took a ten minute smoking break for everyone. Everyone cheered and rushed off to stand in the rain on the platform.

Today I walked the massive fortified walls of Dubrovnik. This independent republic city survived a 15 month siege in the thirteenth century. The Maritime Museum is filled with old documents of ship logs, legal agreements, contracts. The oldest contract recorded in the world was enacted here in Dubrovnik in 1260 or so. It seems this independent republic city has been protected and prosperous by shrewd trading and negotiations since 800 AD. 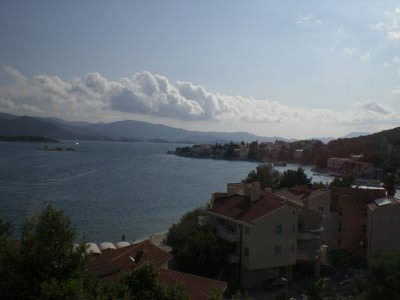 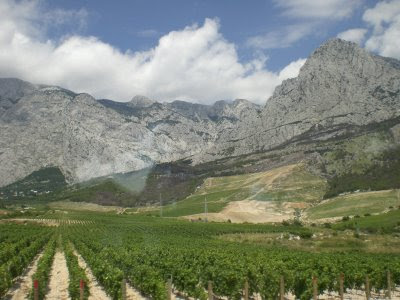 The bus ride was 8.5 hours long, but passed quickly as I spoke with 3 different traveling partners. A woman studying in Zadar and living south of there, studying French and German, told me she may teach, or maybe with her language knowledge work in tourism. Then Mario sat by me on his way to Split, a friendly mechanical engineer from Zagreb. He gave me lots of info and will be checking my blog. Hi, Mario! And finally, Carl and Amber, from the US but now from the UK, entertained me with their world travel experiences. I enjoyed a risotto dinner with them last night in old town Dubrovnak on the harbor. The rain poured off the umbrellas around us in torrents. Tomorrow I explore Dubrovnak. 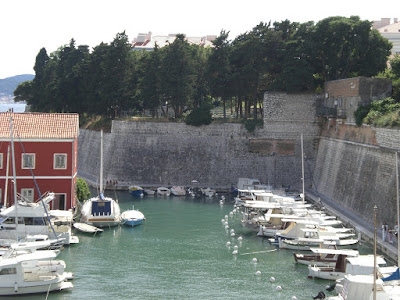 I woke up refreshed and wandered the shoreline, rimmed with older hotels. A sea wall and pebble beaches and stone piers. Families and children and old people in bikinis, playing and sunning. I lay down on a pier. My back against the old flat stone felt reassured. I lay and wrote in my journal, after days of rain turning my white body over in the sun. In the afternoon I took the bus back to old town and this time it was quieter. Oh, the sea organ, moaning and wheezing and singing like whales, from the wind and wave action at the end of the peninsula. People loved it, stopping and cocking their heads like little dogs. Old men peered under the steps to see the openings for the wind, air and sound. Little children played in the waves. I walked the old Roman ruins on the other edge of town and then along the edge of the wall barricading and protecting the city.
Then I walked back to the hostel along the coast, almost an hour, at a good clip.
Posted by Karen A. Terrey at 10:51 AM 1 comment: